Therapeutic ultrasound is a modality that has been used by physiotherapists since the 1940s. Ultrasound is applied using the head of an ultrasound probe that is placed in direct contact with your skin via a transmission coupling gel. 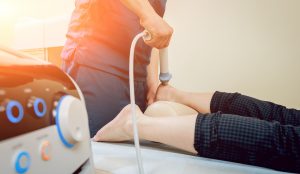 Therapeutic ultrasound has been shown to cause increases in:

How Can Ultrasound Help You?

The effect of ultrasound via an increase in local blood flow can be used to help reduce local swelling and chronic inflammation, and, according to some studies, promote bone fracture healing. The intensity or power density of the ultrasound can be adjusted depending on the desired effect. A greater power density (measured in watt/cm2) is often used in cases where scar tissue breakdown is the goal.

How Does an Ultrasound Work?

The ultrasound waves are generated by a piezoelectric effect caused by the vibration of crystals within the head of the probe. The ultrasound waves that pass through the skin cause a vibration of the local soft tissues. This vibration or cavitation can cause deep heating locally though usually no sensation of heat will be felt by the patient. In situations where a heating effect is not desirable, such as a fresh injury with acute inflammation, the ultrasound can be pulsed rather than continuously transmitted.

Disclaimer: Results are not guaranteed and may vary from person to person.
Font Resize
Contrast
Accessibility by WAH
Call Us Text Us